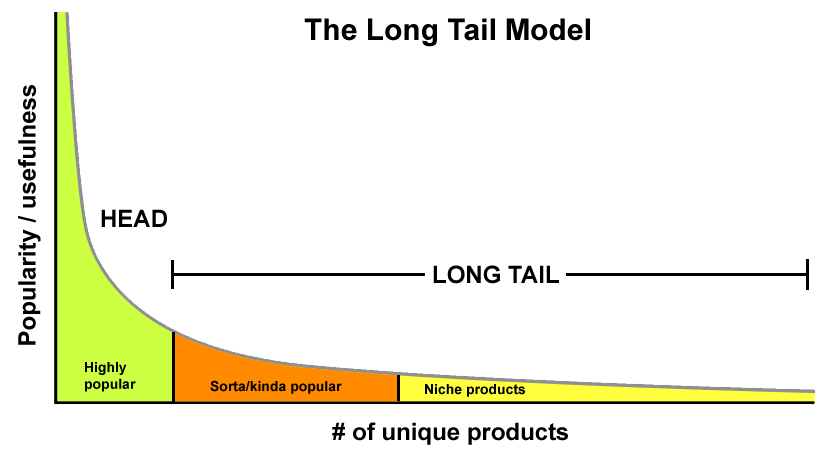 Back in 2004, the Long Tail Theory was first published. It basically says that the internet has put an interesting twist on the Pareto Principle by making it much easier to service the 80% of the products that are not the top revenue earners for a company and that many companies like Amazon, Netflix, etc. have made a wonderful business out of them.

Having the hard to get stuff is what separated them from their brick and mortar cousins and helped grow their subscription rates…and most importantly, if the products are digital, the inventory is virtually free (just another song or movie taking up space on a hard drive somewhere, but not physically collecting dust). This last point is the most important…the Long tail is interesting, but it is also very challenging for physical products as holding inventory poses all kinds of challenges, but in the digital arena, it barely moves the needle in terms of cost to service.

In a long tail business it is more costly to bother evaluating whether something is a hit or not, so instead the best plan is just releasing all of it and letting the consumers sort them out, even letting the consumers vote them up or down to give them some say so in winners and losers. The long tail is really long due to unlimited selection, so there is a lot to be made all along that last part of the tail. Worth noting, trying to provide a niche service and just servicing the hot items or just the dogs has mostly been a recipe for disaster, but those that have serviced it all (Amazon, Netflix, iTunes, etc.) have done amazingly well…pick a niche but cover everything in that niche (although not sure Amazon is a niche business any more).

One big thing that has changed is the idea of a big ‘launch’, with press releases, and a big unveiling. It’s not as important anymore. Instead, plan on the gradual build that turns into a tidal wave. The fact is, the curve of money spent (big hump, then it tails off) is precisely backwards to what you actually want anyway…so roll with it, launch, build, build, build, success.

Is your business made for servicing the long tail? How can you take advantage? Or, maybe you still live in the physical world…Pareto still holds pretty true here…just know where you sit and plan accordingly.